The Poetry of Bookmarks 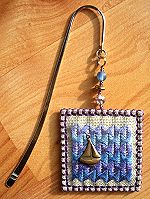 All right, all right. It’s a little sailboat, I know. I don’t have a frigate charm.

Two days ago, I wrote about the exquisite language in The Book Thief. I don’t think I used the word poetic, but that’s another way to describe Zuzak’s words. Immediately, my brain made a connection to an article I read recently about The Poetry of Bookmarks.

Like bookmarks in a story to be continued,
I leave behind my hunger for a different life . . .
–from the poem Retirement.

When he stopped she closed on him like a book on a bookmark . . .
–from Ted Hughes’ poem Crow and Mama.

I’m no poet, but I’m on a mission to use a bookmark simile or metaphor in my current WIP. It’s already got a stitching reference.

Like a bookmark that slips out of a book unnoticed, she became separated from her class at the museum. Left behind. Lost.

The day she got her license marked her life like a bookmark, separating a long stretch of confinement from her newly acquired freedom.

My brother cut the X off the Fed Ex envelope and stashed it in his library book. He had dozens of them. Xs from magazine ads, the newspaper, an Ex-Lax box. He ran for the scissors every time he spotted an X, and every book in the house, mine included, had at least one X in it. If you ask him why, he’ll tell you, “X marks your spot.”

All right, I’ve had my fun. It’s your turn. Write your own bookmark simile or metaphor or mini-story in the comments.

If you want some (good) examples, check out this article by Laine Farley over at BiblioBuffet.

Thanks to Alan at the Bookmark Collector blog for directing me to the article originally.